This summer I had the privilege of being able to not only do a lot more art festivals, but also in having more time in between them to explore and photograph. This was all made possible by quitting my full time job this past winter to be able to devote myself to what is really most important to me, my artistic work. And while that has been a sometimes daunting and scary task, I was able to reap some of the rewards this summer as I got the opportunity to meet a lot more wonderful people at art festivals, and spend a lot more time in the Colorado mountains than I have in years. I have posted these images to my Facebook page, but I thought I’d spend a few minutes and talk about a few of my favorites and why they were special. 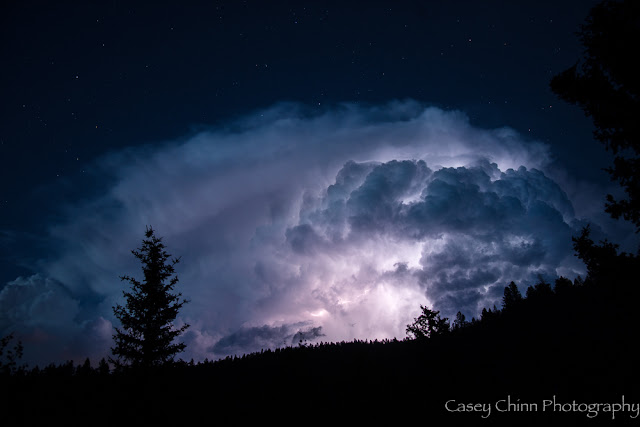 This image was taken just west and south of Salida on Poncha Pass. It was the fourth of July and I was returning back to my campsite after enjoying some holiday festivities. There was a fire ban in effect so the town was unable to launch fireworks as usual from the top of Tenderfoot Mountain. As I drove up the dirt road to my campsite I saw flashes of lightning coming from a thunderhead above the ridge to my left. I decided to stop and try taking a few images and as I did the storm loomed larger and the lightning began to become more frequent and bright. I finally got an image I am happy with. In many of the early images the sky is too bright and doesn’t feel like night. In the latter ones the sky is too dark and the cloud was lit too brilliantly by the lightning to have detail visible within. I think this one strikes a good balance. You can see the cloud lit up, and there is some color in the sky to give the cloud shape, not to mention some stars too. 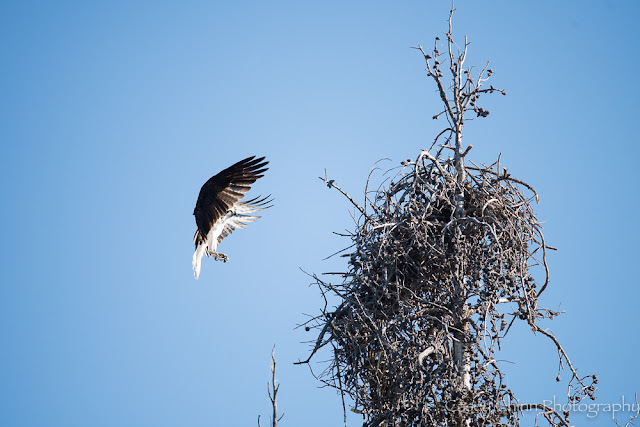 This was taken at Shadow Mountain Lake near the town of Grand Lake. I was staying near the lake in a family cabin and was able to go out early each morning on the calm still waters in my kayak and paddle around the islands on the southern end of the lake that are part of an Osprey Eagle sanctuary. It was wonderful seeing the birds, and a real challenge to photograph them as I was in a kayak on the water with a fairly long and heavy camera lens trying to photograph sometimes fast moving birds. There were a lot of “outtakes” to say the least. It gave me a great respect for dedicated wildlife photographers. This is one I caught when one one of the birds was coming in for a landing at it’s treetop nest. 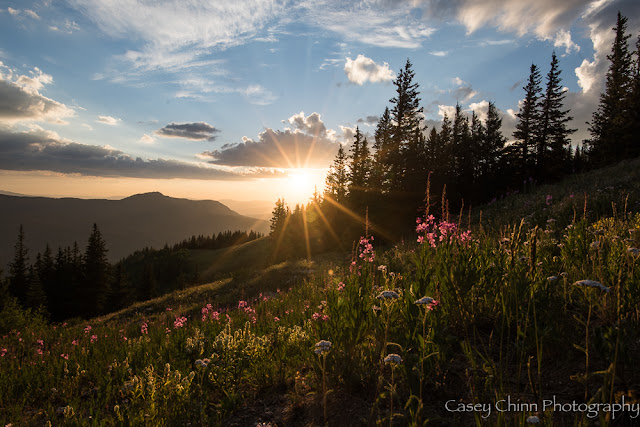 Summer in the mountains is a magical time. With the brief season of warmth comes an explosion of wildflowers. I took this on one evening camping near the Eagles Nest Wilderness north of Silverthorne. It was a beautiful warm summer evening and this image just reminds me of that, and I think conveys it pretty well. 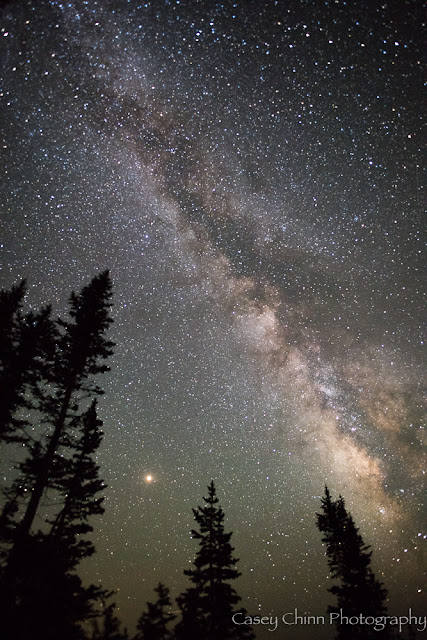 This photo of the Milky Way was taken in an area called Paradise Basin, near Schofield Pass outside of Crested Butte. The stars were brilliant that night and there was an extra bonus of having Mars very bright in the sky as well. I love the way the camera can capture detail in the stars that is invisible to the naked eye. I’m always amazed by the results. This image just reminds me of the incredible beauty of a starry summer night in the mountains. 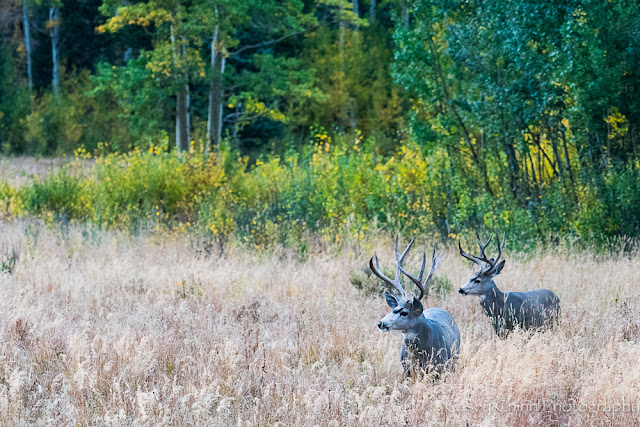 This last image is technically still in summer, taken on September 17th on a backpacking trip into Rocky Mountain National Park. I arrived to the first nights camping spot just a little before dusk and there was a buck deer grazing in the meadow which I would be camped at the edge of. He looked up as I came tromping in, but didn’t really seem to concerned about me at all, and just went back to grazing. As I got out my camera I noticed that there was another one not far away. I didn’t have a particularly long lens with me since I was backpacking and concerned about weight, but as it turned out I didn’t really need one. They slowly moved closer and closer to me as I photographed them in the oncoming twilight. This is my favorite image of the two of them together. They ended up bedding down in the meadow all night long even with me right there. In the morning they grazed within 20 feet or so of my campsite. It was a real treat.
These are just a few of the images I captured on my travels around the state this summer. I have lots of great memories from this time and I’m grateful for the opportunity to have experienced some of Colorado this way, and to have had the privilege to meet so many wonderful people at the various festivals I have participated in.
Speaking of festivals. I just recently was added to the Sedona Arts Festival in Sedona Arizona October 13th-14th. I look forward to sharing with you the images from that trip. It should be a great time of year to be down there and enjoy some fall color with the beautiful red rocks of Sedona. Stay tuned.

The Art Storefronts Organization has verified that this business has provided a returns & exchanges policy for all art purchases.

To ensure your satisfaction I will refund or exchange any purchase of my artwork within 30 days of the purchase date.

This website provides a secure checkout with SSL encryption.

The Art Storefronts Organization has verified that this Art Seller has published information about the archival materials used to create their products in an effort to provide transparency to buyers.

My limited edition custom metal prints are made in a dye-infused metal process that has been shown by scientific tests to have 2-4 times the image lifetime of traditional paper prints .

Your cart is currently empty.

This is only visible to you because you are logged in and are authorized to manage this website. This message is not visible to other website visitors.

This means you can use the camera on your phone or tablet and superimpose any piece of art onto a wall inside of your home or business.

To use this feature, Just look for the "Live Preview AR" button when viewing any piece of art on this website!

Below, select which favorite lists you would like to save this product into.

This means you can use the camera on your phone or tablet and superimpose any piece of art onto a wall inside of your home or business.

To use this feature, Just look for the "Live Preview AR" button when viewing any piece of art on this website!

SIGN UP FOR MY NEWSLETTER AND BE AUTOMATICALLY ENTERED TO WIN!

You will be entered in my next print giveaway for a chance to win a 12x18 Limited Edition Metal Print!

This offer is valid for EVERONE on my email list as a way of saying thank you for being a fan of my work.